Zipp is g5 BP
It’s Nerf or nothing!

Since there are markings for safe and fire on the right side, does that mean that FGC-9 is designed with an ambidextrous safety, but the maker of this Nerf simply didn’t bother to add one? Or is it on the left side only and the markings are ambidextrous for no reason?
Posted about a year ago Report
Link Quote Reply

It’s an AR-15 style FCG, so technically you can make the selector ambidextrous, though am not sure if that version is included with the updated files.
Posted about a year ago Report
Link Quote Reply

Which one of these are better?
Posted about a year ago Report
Link Quote Reply
Background Pony #5252
@NitroFury
Better for what use case? For example if you want to shoot when emerging from water, pistons are the better choice. But I don’t think you’ll need that capability.

They all have their advantages and disadvantages. Just google your question (or preferably duck it) and pick what’s best for you.
Posted about a year ago Report
Link Quote Reply
Background Pony #70BF
@NitroFury
For a general purpose rifle to be used for purposes more serious than plinking or hunting, in my opinion long stroke gas piston systems have established an enviable track record for reliability, though they are maybe a bit less inherently reliable than roller delayed blowback systems, which tolerate significantly wider variation in gas pressure curves. Roller delayed blowback is perhaps the most tolerant of both neglect and abuse.

Direct impingement shouldn’t even be in the running and it’s only as inexpensive as it is and only works as well as it does due to vast amounts of field testing in Southeast Asia about fifty years back, culminating in the M16A1, with its chrome-lined bore and chamber.

The M16A1 is admirably reliable, at the cost of extremely expensive chrome lining operations that are non-optional. The chrome-lined chamber is absolutely required for reliable extraction when the weapon isn’t white-glove clean or dripping with lube. The nearly parallel sides of the 5.56mm cartridge below the shoulder plus very weak primary extraction from the mass of the relatively light bolt carrier group as the buffer continues rearwards in the buffer tube were demonstrated at An Bao and Kham Duc and LZ X-Ray to be an unhappy marriage, to put it charitably. Chromium is harder and tougher than steel and has a lower coefficient of friction, greatly reducing the amount of force required to move the bolt rearward and begin the extraction process after the bolt unlocks. Direct impingement systems run dirty, like roller delayed blowback systems, and not nearly as tolerant of neglect. They’re “needy” of constant maintenance in the field in ways no other systems are. The glowing early reports and enthusiastic testimonials from Special Forces advisors in Vietnam were from men who sweated blood to keep their rifles white-glove clean between sixteen-hour ruck marches and foot patrols. When the new rifles were handed to men not trained on them, who were told “this is a new space age rifle designed by rocket scientists from NASA and it’s self cleaning,” using ammunition manufactured by the lowest bidder, very bad things happened, generally involving the words “failure to extract.”

Chromium is also a terrifyingly expensive imported strategic mineral not mined in North America in significant quantities, and, from the perspective of the Cold War, in the event of a large-scale conventional ground war against an existential threat, US strategic stocks of chromium were not remotely sufficient to manufacture jet engine turbine blades for military applications and small arms with chrome-lined barrels simultaneously. For gas piston designs, chrome lining is nice to have–it greatly eases cleaning in the field and gives protection against wear. Supposedly roller designs can’t have chrome-lined barrels because of the gas flutes that have to be machined into the sides of the chamber after the barrel is installed and headspaced, but I suspect the real reason has more to do with driving up the already high manufacturing costs. For direct-impingement designs it’s not optional. It’s milspec for M16 and M4 barrels 50+ years later because nothing better has been found, though nitriding gives some of the same benefits at lower manufacturing cost for extraction, if not durability in full-auto fire. The exotic aluminum alloys of which the upper and lower receiver are manufactured, not to mention the magazines, which make the rifle so delightfully light, are another scarce and valuable commodity that would have instantly vanished the second day of World War III, being needed more urgently for aircraft manufacture. Remember that sixty years ago Armalite was a subsidiary of Fairchild-Republic Aviation.

All of these systems can be shut down in an instant by damaged or out-of-spec magazines. Note that steel AKM mags and steel G3 mags are dirt cheap and caveman simple to manufacture and substantial enough to drive tent pegs. They are essentially conscript-proof, at the cost of 120 rounds of 7.62x39mm in four thirty-round steel AKM mags weighing exactly the same as 120 rounds of .30/06 in fifteen Garand clips. The M16, AR15, and AR10 were originally designed around disposable lightweight stamped aluminum “cassette” magazines, and it shows. AK and G3 mags can be handed out to illiterate tribal militiamen and illiterate Third World peasant conscripts and will still work after Abd’uallah tries to throw them at a camel spider and hits a brick wall instead. Aluminum M16 mags, not so much. Granted, this is a criticism of the AR15/M16/M4 platform specifically and not direct impingement generally, but I have noticed that in discussions like this, when we say “direct impingement” what we always actually mean is a certain Eugene Stoner design plus accessories, as handed out by the freighter load to this week’s allies of convenience by Uncle Sugar.

It is mildly amazing that the M16 and M4 work as well as they do–with ammunition made in an affluent First World nation, with all of the quality control and attention to detail that this implies. This was only made possible by enormous sacrifice in blood by the poor bastards who picked the short straw and got handed the ones with the low serial numbers, plus many billions of dollars spent on reliability studies and design tweaks involving high-dollar exotic metallurgy over the following decade. Even now a thousand and one aftermarket band-aids are available–silicone rubber O-rings to drop in under the extractor to boost its tension, heavy buffers, heavy buffer springs, redesigned magazines, bolt carrier groups with exotic coatings to reduce carbon buildup and make them a little easier to clean, exotic lubricants more tolerant of high temperatures and less prone to oxidizing and gumming up at high temperatures. Even with these additions, just try to feed the M16 or M4 copper washed steel cased or lacquered steel cased ammo with propellant made from ground-up World War II leftover artillery charge increments, with powder charges varying as much as 15% from top to bottom in every carton of twenty, with bullet weights varying almost as much, with cartridge case length to case mouth and/or shoulder .020” or more different across that same carton of twenty and overall cartridge length varying double that, and you’re not going to have a pleasant day at the range, much less at the two-way range. Note that this is the ammunition the other 95% of the planet has in their supply chains, usually imported from China or Russia. These problems simply do not arise with roller delayed blowback and gas piston operated rifles, so long as the cartridge fits in the chamber and the bolt can go into battery behind it. The worst thing that usually happens is case head separation–and steel cases are more resistant to this phenomenon than brass.
Posted about a year ago Report
Link Quote Reply

I agree with most of that, except for the part on the expense and complexity of roller-delaying systems. If what you’re saying is true in that regard, then why did a lot of second-rate militaries adopt the G3 and its progeny instead of long-stroke designs based on the Garand and its progeny (ie Kalashnikovs)?

I’m not criticising, just wondering, because if the G3 is difficult to produce, then why is Iran still using it?
Posted about a year ago Report
Link Quote Reply
Background Pony #5252
@Background Pony #70BF

The exotic aluminum alloys of which the upper and lower receiver are manufactured, not to mention the magazines, which make the rifle so delightfully light, are another scarce and valuable commodity that would have instantly vanished the second day of World War III, being needed more urgently for aircraft manufacture.

Aluminum is abundant on Earth. Is the problem that the other alloy ingredients are scarce? Or that there are not enough aluminum mines and new ones would have to be built to cover wartime demand?
Posted about a year ago Report
Link Quote Reply

New aluminium (y’know, from bauxite ore) requires a lot of electricity to turn into usable aluminium. Modern efficient electricity production means that making more aluminium is theoretically threatened by a major war, but in all likelihood that wouldn’t be as big a problem that #70BF is making it out to be, because…

…like with steel, the majority of aluminium comes from melting down scrap and reforging it. Once it’s made, it’s easy to remake into other stuff.

Also, if we’re talking about a really serious WW3 (read: nuclear exchanges), then shortages of aluminium for guns or planes are the least of your concerns.
Posted about a year ago Report
Link Quote Reply

U mad?
Super rare WW1 German cannon found buried in Canada.
It was buried under the pitcher’s mound at a baseball field. They will try to restore it.
Posted about a year ago Report
Link Quote Reply

Ecto-Phase,Activate!
@lonewolf
That is really cool!
It makes me wonder how much stuff is lying around forgotten about.

Posted about a year ago Report
Link Quote Reply
Background Pony #5252
@Dex Stewart
A lot of stuff. Small arms and unexploded ordnance are dug up all around Europe. (Yes, I know this was in Canada, not Europe.)

Fun fact: in my country if you dig up a gun, even one that is so rusty it’s obviously unusable, you will most likely be charged with illegal possession of a gun. The sentence for that ranges from 6 months to 8 years of prison.
Posted about a year ago Report
Edited about a year ago
Link Quote Reply

Ecto-Phase,Activate!
@Background Pony #5252
I read in Dee Dee Ramone’s autobiography about him growing up in Germany,he’d find a bunch of WW2 stuff and sell it.
Posted about a year ago Report
Link Quote Reply 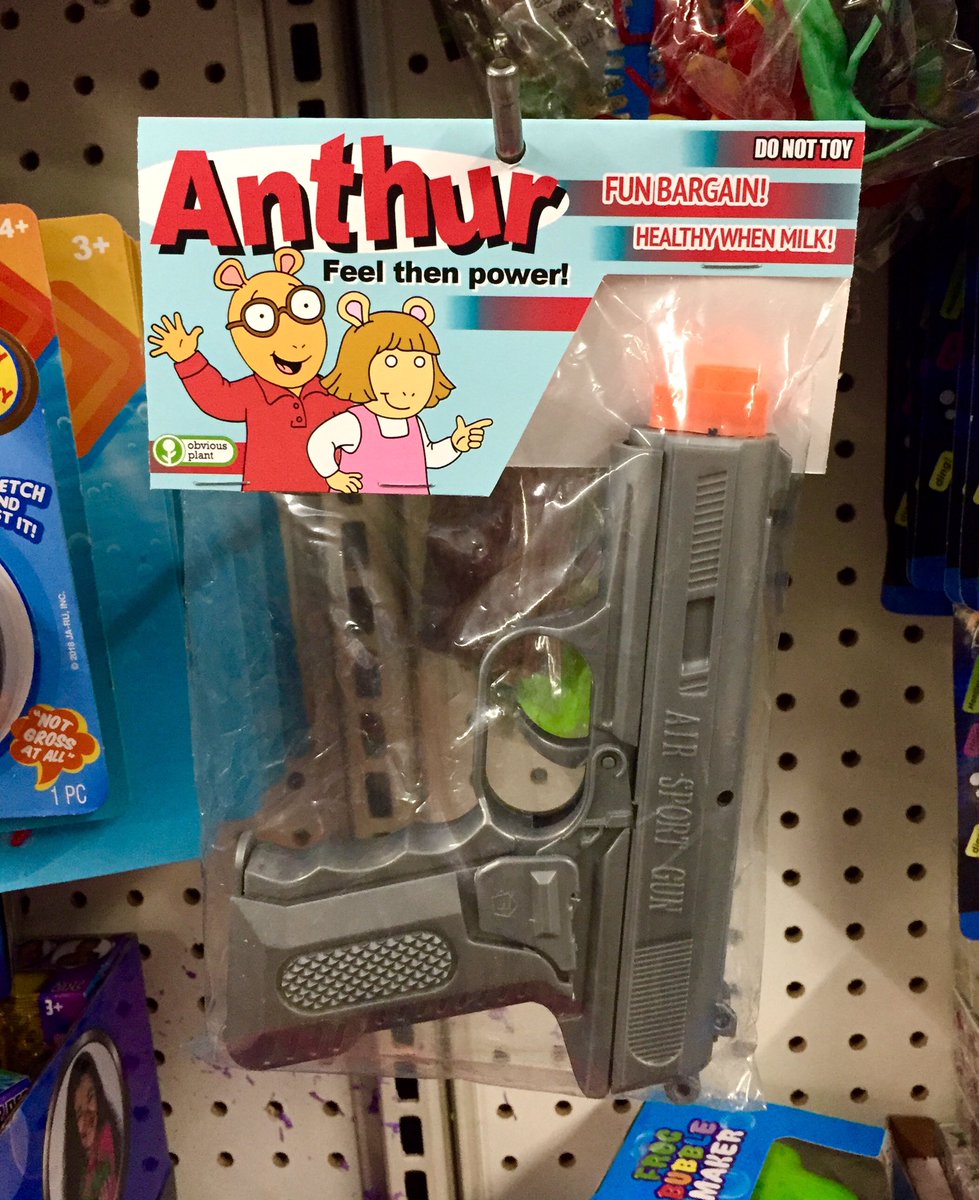 That may come in handy in dealing with pesky little sisters.
Oh wait…

Ecto-Phase,Activate!
@ЅℰℒᎯℙℋℐℰℒ
Arthur doesn’t need a gun. All he needs is his fists.
Posted about a year ago Report
Link Quote Reply 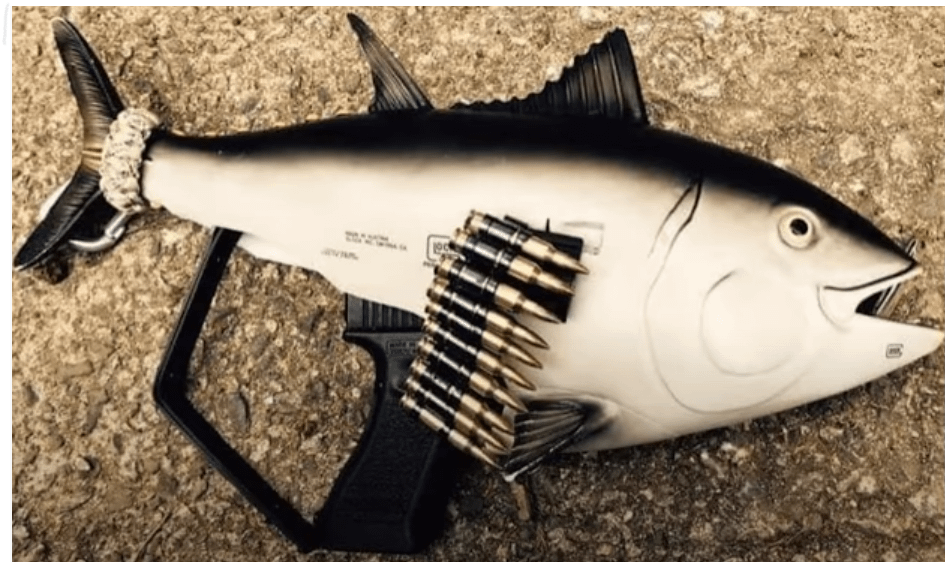 Stay Strong
Did someone summoned me?