The Element of laughter
@trashboat
Well you must understand I’m a very over exaggerated person, I’m pretty sure it could run that for sure but I’m saying me Personally wouldn’t trust it.

I’m a giant Pansy when it comes to things like this cuz of my OCD.

For starters I see my dog run around out in the parks without a leash all the time with my family, but I never let her do that when I’m walking her cuz I’m too scared to lose my little angel.
Posted 8 years ago Report
Link Quote Reply

The Element of laughter
@trashboat
Hey my OCD! that’s something I can add to the Vent thread!

OCD! I fucking hate my OCD, it literally stops me from doing Anything I want to do, Seriously do you know how hard it was to switch out my Icon today?

I’m happy with my new one but my OCD cant stand I messed up the natural order and it wont stop screaming at me now.
Posted 8 years ago Report
Link Quote Reply
Buttstank

@Number1pegasus
I don’t think I’ve ever had as much trouble with that type of thing as you seem to but I absolutely feel that way about washing my hands. The only thing I can do to keep myself from using up an entire bar of soap after handling something nasty is to think for a second about the fact that I definitely washed my hands and walk away from the sink. Sometimes eating something with my hands solidifies it. Even then, there’s that annoying little feeling in the back of my brain saying that the revival of the Black Plague is currently on my fingers.

The Element of laughter
@Too_Offensive
Oh boy I know how that feels, I hate germs.

I literally take showers 5 times through out the day Sometimes when I feel like it.

I remember one time When I was a kid my brother throw his dirty ass sock on my neck and I got a towel and started rubbing it on my neck so hard and fast I got friction burn.

@Number1pegasus
I would probably constantly be in the shower if not for the fact that my laziness outweighs my germ phobia.
The worst part is that the only way to deal with it is to just stop and leave it. It’s like a hangnail in your brain.
Posted 8 years ago Report
Link Quote Reply
Number1pegasus

The Element of laughter
@Too_Offensive
>It’s like a hangnail in your brain.

I need to write that one down!

And Brother I Hurt People

Alright, so it’s no surprise that Tumblr hates bronies. We’re all “woman hating, fedora wearing man children”, inferior. But this post just puts the icing on the cake. 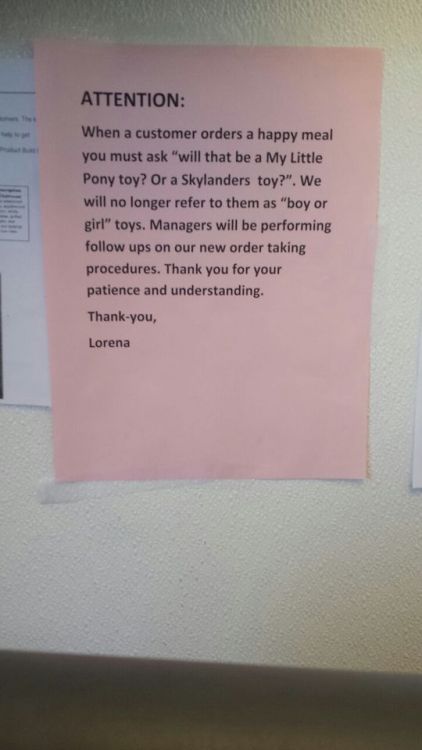 People are celebrating it as a chance for children to not feel pressured to choose either a boy or girl toy: now, it’s just a toy. The link in question that she thinks makes us “whiny”.

I love how much she generalizes: each brony must argue that MLP is for both bronies! It’s not that this Mcdonald’s boss is trying to streamline things, or is maybe just a nice person, it’s da big ol’ mean brownies! It amazes me how people want to take a hit at us any way they can.
Posted 8 years ago Report
Link Quote Reply

PM me Maud pics
@And Brother I Hurt People
Because even positive change is bad if they weren’t the ones who made it happen.
Posted 8 years ago Report
Link Quote Reply
Buttstank

@And Brother I Hurt People
I bet if it was superwholock toys and… Some girly thing tumblr likes there would be people celibrating “social justice succeeds! Whoo!”
Posted 8 years ago Report
Link Quote Reply

Amber
Joining a bit late in the console discussion

@Latios381
What do you plan on doing then? Tell every technological company on the planet that the trillions of dollars they invest every year towards turning a profit they’re forever banned from investing in making computers more powerful and as a result doom them to bankruptcy in the long run just cause a couple people on the internet think they know what’s the best for them business wise? Cause I’d love to see how telling every computer company on the planet that you want them to go bankrupt goes down with them.
@archestereo
As a matter of fact there is no real difference between consoles and pc anymore. A lot of games now you install the game to the hard drive and the disc is pretty much only for installation, they both have ability to browse the internet, they both can use facebook and the list goes on. The only real difference between consoles and pc at this point is that they use different gui.
In fact for E3 before the new consoles came out they just ran emulators on computers to play games with the console gui plastered on it.

Consoles are pretty much low grade computers with a gui slapped on them. The reason why E3 games run faster and at a higher resolution is that you’re not actually playing on the consoles at E3.
No offence to console gamers, but there’s no way in hell I’m paying $400 JUST to use a different user interface on a computer. It’d be like paying $400 just to use that default windows 8 tablet user interface.
And don’t give me the whole, “consoles run faster” garbage; the reason why consoles run games faster is that windows since windows xp keeps fucking up. Every year they increase the system requirements for their operating system instead of making a stable operating system. So of course a console is going to run faster than a operating system with constant crap all plastered into it and constantly shoves garbage into it. I installed litestep onto my windows 7 partition and guess what? The amount of system resources used halved and my games run much faster. So of course if you have a windows shell that runs like ass it’s going to slow down your computer.
Tl:dr; if you have two trucks that are the same model and one truck you fill the bed with tons of bricks of course the other is going to drive faster.

>Consoles are pretty much low grade computers with a gui slapped on them. The reason why E3 games run faster and at a higher resolution is that you’re not actually playing on the consoles at E3.

I have to agree.

I’ve always known that ever since I saw one of the betas of Final Fantasy X back then in the 1999-2000’s. I don’t know if you guys had the chance to see it, but If I had to compare it with something, that thing was PS3 tier in therms of graphics and on how fluid the animations were. I was so incredibly impressed and hyped (I was also a very impressionable 11 year old, but still) so you could imagine my reaction when the final product came out.

That doesn’t mean I ended up disliking the game, of course. I love it to bits even today.

The difference is that Squaresoft wasn’t trying to “trick” the audience nor were responsible for the hardware and it’s limitations.

The point is that the blatant difference between those betas and the final game made me realize that PCs are more powerful than consoles, even though nowadays there are not a lot of differences between them.

That said, I still buy them. Well, until last generation at least.

So far for this one I’m sticking to handheld consoles and PC.
Posted 8 years ago Report
Link Quote Reply
archestereo
…ya know, call me crazy, but i’m still kinda holding out for something to rise from that recent “micro-console” trend that makes consoles in general relevant again.

…granted, all they’ve really done so far so far is put mobile games on the living room tv with a gamepad, but at least some of them have come up with practical form factors for the hardware; if somebody could just come up with something cheap, accessible, convenient, stable, and unique (let’s be honest, PC gaming can sometimes swing to the other extremes), then consoles could still have a place in the future of gaming.

…and if you do think that’s crazy, you should see the initiative to modernize “location-based gaming” (arcades).
Posted 8 years ago Report
Link Quote Reply
Number1pegasus

The Element of laughter
So someone actually video tapped a video of living baby chickens being grinded into meat….. I feel really sick right now….
Posted 8 years ago Report
Link Quote Reply

Broken Ball of 💽TM21
@Number1pegasus
Why would they bother with chicks?
Posted 8 years ago Report
Link Quote Reply
Number1pegasus

The Element of laughter
@PonyPon
I don’t know? all I know is they were still Living.

They were alive and they killed them, They didn’t even know what was going on!? how the fuck can someone do that!? THEY WERE FUCKING BABIES!

The Element of laughter
@PaskaNaakka
That’s depressing, I mean that’s inhuman, I even deleted the video from my history.

I don’t want to even remember I saw that.
Posted 8 years ago Report
Link Quote Reply

PM me Maud pics
@Number1pegasus
Shit like this is why i’ve cut my meat consumption.
Posted 8 years ago Report
Link Quote Reply

Alexis the Queer Witch
i dont even care for chicken

The Element of laughter
@PaskaNaakka
It honestly made me not want to eat chicken for a while.
Posted 8 years ago Report
Link Quote Reply
Number1pegasus

The Element of laughter
@MoogSourceVermona
I hate it Fresh, though I do like salmon fresh.
Posted 8 years ago Report
Link Quote Reply

So someone actually video tapped a video of living baby chickens being grinded into meat….. I feel really sick right now….

Oh gosh…that reminds me of that other video when they did pretty much the same but with a dog, so the can sell the meat to a Chinese restaurant.
Posted 8 years ago Report
Link Quote Reply

Alexis the Queer Witch
@Number1pegasus
fresh is the only true way to eat any fish
thank goodness you dont live in the maritimes, youd get hung for saying that
Posted 8 years ago Report
Link Quote Reply
Interested in advertising on Derpibooru? Click here for information!